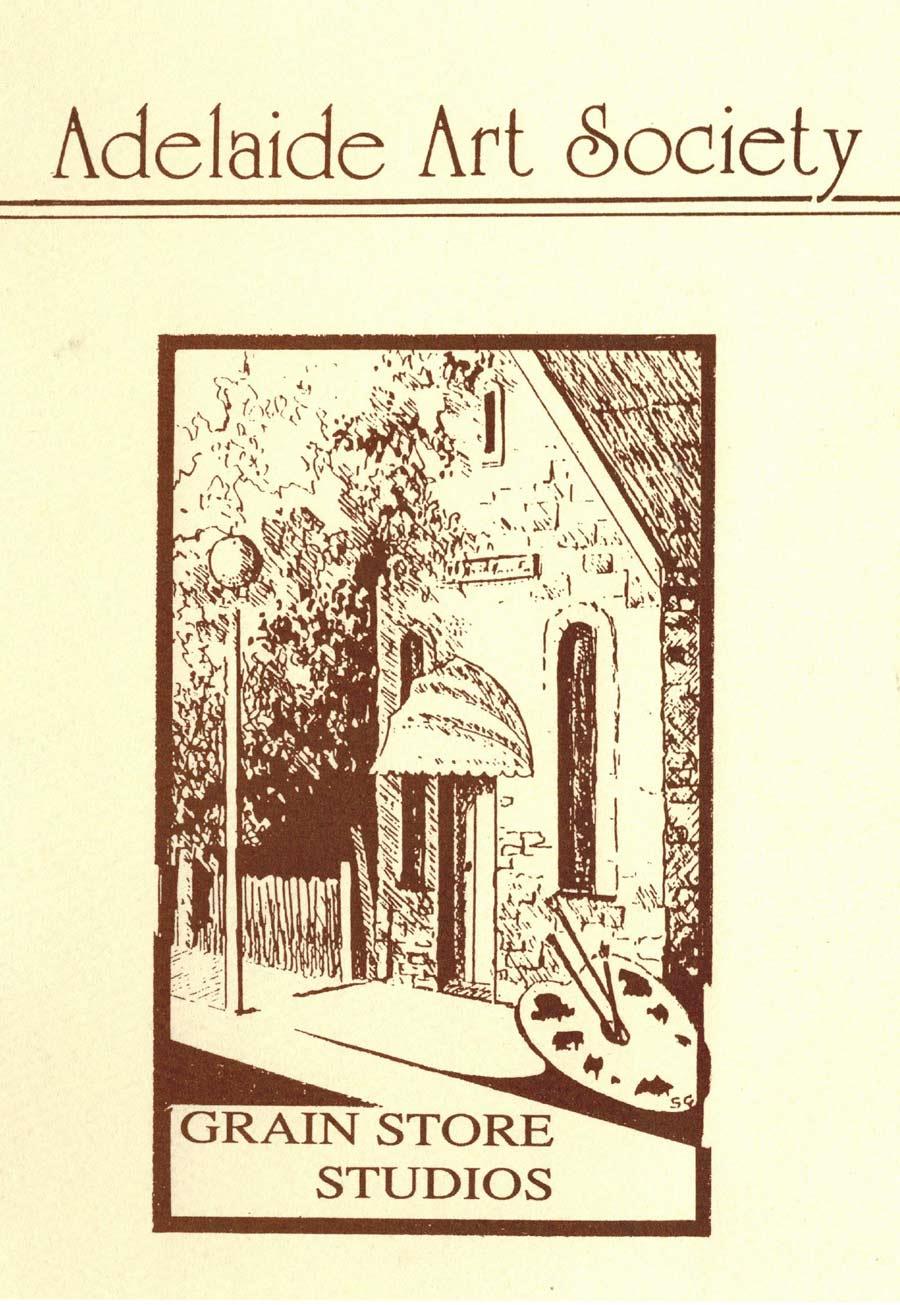 From its humble beginning in an East Terrace basement in 1952, the Adelaide Art Society has progressed from the original 18 members to the present 184 in these premises at Margaret St. Having advertised in the 'situations vacant' column for interested people, John Love, a Scottish carpenter, received enough replies to band together a keen "Citizens' Art Group". As this group grew in numbers, they needed to find a more permanent venue for painting and the premises used now were found by the then president, Mr. Alan Jordan, in 1964.

Improvements for additional storage and meetings were carried out, until in 1990 it was decided to renovate the 1874 building to a safer, pleasant working place while still retaining as much of the character of the old building as possible.

All external stonework has now been restored and the baltic pine floor renovated. We have special studio and gallery lighting and hand made exposed beams are a feature of the studio.

In 1837 the original land title was granted to George Fife Angas (8, partners), who purchased much of the land in the area while living at Lindsay Park near Angaston. This land changed hands a number of times before being sold for £90 to a stonemason, Charles Hodges. With financial help from Henry Hammond, a well-known builder of Childers St. North Adelaide, Hodges created the sandstone building as a grain store, selling it for £390 to William Pope, a barrister, living in Brougham Place and president of the Cricketing Association. Margaret Street was sewered in 1882 and Pope sold his grain store to Freidrich Heinrich Christian Winter, a German baker. He apparently worked in what is now "Perryman's Bakery" using our building for its intended purpose. (bread was then 3 1/2 d a 2 lb loaf, beef 4d to 6d a pound and eggs 9d a dozen!). Margaret Street was then a working-class area, mainly masons, plasterers, laundresses; but there were more specialised people; a cocoa manufacturer, musician and boarding house proprietor. In 1878 a well known Adelaide name appeared in the area...John LeCornu.

Winter's sons continued in the bakery business until 1896 when they sold the building to David Scott, a grazier from Tibooburra, N.S.W. Various leases saw other occupants during this time, including Mrs. Mary Lambert who had connections with the Salvation Army. They rented the building from successive tenants for use as a Gospel Hall. Scott's brief ownership lasted ten days.

He mortgaged to two prominent S.A. citizens, William Milne and William Bundey. Amongst Bundey's business interests was a shop and dwelling at 3 Finniss Street...in appearance very like the shop on the corner of Gover and Margaret Streets, still having the original iron frame windows. His nephew inherited the house - W.G.Magarey, whose name is perpetuated in the Magarey medal award.

Scott's mortgage being finally discharged, the property was sold to Henry Woodcock in 1900, who had been the butcher on the corner of Tynte and Margaret Streets since 1891.

After six years the building passed to Major Henry Palmerston Tomkinson and during his ownership was connected to the sewers.

Between 1906 and 1911 there were a number of tenants including Arthur Bailey, W.F.Roberts and Mrs.Elizabeth Esau. The Salvation Army were barracked here between 1911 and 1925.

A salve manufacturer, William Usher of Norwood bought the building in 1912 and subsequently sold it to Ronald McKenzie. 1925 once again saw the building being used as a flour store. Perryman's Bakery was established at this time in the corner shop and our building continued as a storage facility until 1964 when it was purchased for 1,400 pounds to commence a new life with the Citizens Art Group.

At John Love's gathering of recruits from an advertisement in the paper,(17 men and one woman, Connie Ottler), the name Citizens Art Group was suggested by a member, David Cameron, who had belonged to such a group in Scotland. John Love stated that his employer Mr.

Baulderstone was reconstructing a house in East Terrace and had offered the basement as a studio for 10/- a week. With help from Mr. Baulderstone and much voluntary labour, the basement became a studio with chairs donated from each member.(they were obliged to perch on piles of 'Women's Weekly" magazines for the first few nights.) These chairs were later sold for the handsome price of 2/- each. One, however, remains in the present studio and has recently been refurbished by Gordon Mart.

Connie, being the only woman, would obligingly supply supper. She recalls that -"not being much of a cook, my rock buns were rather flat, however they were happily washed down with cups of coffee".

When the six months rent was due, Mr. Baulderstone very generously told the group to buy something for the studio so they purchased an electric jug and cups and saucers.

A group was later organised for Sunday painting, where all would meet at the Modbury Pub. The president's English pronunciation of "pub" being a source of some delight to members.

Christmas parties were held each year, probably adventurous affairs as very little information was recorded. Neil Wallace, at one of these functions, apparently led the whole bunch in a conga line, down East Terrace -- accompanied on his bagpipes.

In 1974 the Citizen's Art Group changed it's name to the Adelaide Art Society because members felt that the name "citizen" inferred that the enrolment was for the elderly.

In 1954, after sitting with their first exhibition at the East Terrace studio and having only one visitor, Connie Offler discussed the idea of taking paintings out to the public.

As a result of a sympathetic City Council, 90 paintings were hung on North Terrace. This was rather an inconvenient situation, as members had to remove the paintings each night, store them at East Terrace, then re-hang them in the morning. The exhibition, however, generated enough interest to inspire a committee to seek a sponsor for future outdoor displays.

Robert Campbell, director of the Art Gallery and his wife, Elizabeth Young, Advertiser art critic, helped in many ways during the initial years and on their suggestion, the "Advertiser" was approached for sponsorship. With further negotiations and support from other art groups, the Advertiser Art Exhibition evolved.

A number of exhibitions were held in the Curzon Gallery (in Gawler Place) and reviews by newspapers were favourable. The standard which has been achieved and maintained will be a welcome surprise to those who view the exhibition " and later ' -- a refreshing attraction" and perhaps the most observant social comment --

"Meeting the Citizens' Art Group at its first gallery show, was like moving in on a very nice family party", a statement which probably sums up the aims of the present art group: to gather together a friendly collection of people who enjoy art. Those who aspire to greatness as well as those who like to learn in the company of others.

Maintaining a degree of professionalism in works shown for public viewing is becoming more essential with the increasing number of art groups exhibiting in South Australia.

Many members are also Fellows of the Royal South Australian Society of Arts and a panel of five artists select paintings for the several exhibitions each year. As well,work hangs in rotating displays in the Blackwood and

Hindmarsh hospitals. The Adelaide Art Society however, still encourages painters with various levels of ability and there are painting tutorials and specialised weekends available to non-members as well as regulars.

The selection committee inspects work by painters wishing to become members of The Adelaide Art Society, usually in February and July of each year.

The Society is indebted to the number of members who spent many voluntary hours during the renovations. We were assisted by a matching capital grant of $12000 from the Department for the Arts.